“There is a window of opportunity now that people see the benefits of reduced traffic for air quality, road safety, and tranquility.” 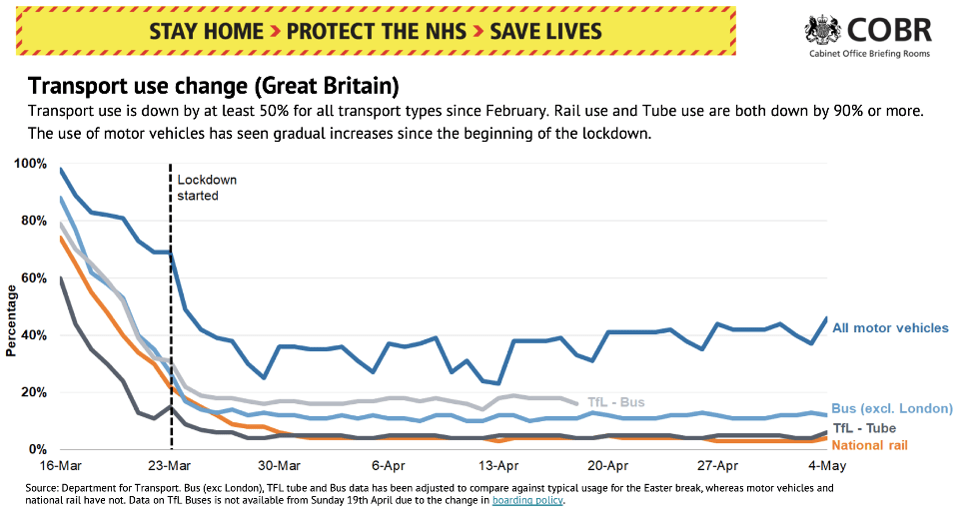 “It is important to intervene quickly,” said Robin Lovelace of the University of Leeds’ Institute for Transport Studies. “There is a window of opportunity now that people see the benefits of reduced traffic for air quality, road safety, and tranquility.”

The U.K. government has come under pressure to create a national funding package for pop-up cycleways and sidewalks similar to the one introduced by New Zealand last month and a £10 million program introduced by Scotland on April 28.

Nevertheless, the government is pushing for such infrastructure to happen as soon as possible, as reported on these news pages:

And over the past week, councils across the country are taking advantage of this window:

London will have Europe’s biggest car-free zone as Sadiq Khan closes some of the capital’s busiest roads to encourage cycling and social distancing | dailymail.co.uk

How Kent roads could dramatically change to encourage more cycling and walking after lockdown | kentonline.co.uk

Devon County Council is also moving on this:

A series of temporary measures to support social distancing for walkers and cyclists is being explored by Devon County Council. It is looking at widening narrow pavements which could restrict pedestrian movements and areas where the walking and cycling network can be extended and improved. ‘Pop-up’ facilities could be installed to provide wider areas for walkers and cyclists while segregating them from traffic. And parking spaces could be removed in order to widen footpaths and introduce cycleways

Councillor Stuart Hughes, Devon County Council’s cabinet member for highways, said: “We welcome the government’s announcement of investment in walking and cycling. This is a great opportunity to embed some of the greener, healthier travel habits we’ve seen during the lockdown and we’re trying to find ways to support people who choose active travel on their return to work. We’re continuing to develop these plans to enable their delivery, if possible at the earliest opportunity. We will be liaising with town and parish councils and we will be seeking support from the business community to understand how we can deliver local aspirations for pedestrian and cycling improvements.”

And Exeter is making efforts – as part of a larger framework:

Exeter’s Green Party have written to leaders of Exeter City and Devon County Councils asking them what steps they plan to take to comply with government demands to reallocate road space to people walking and cycling. They suggest Exeter could install ‘pop-up’ cycle facilities to ensure physical separation from traffic; using cones and barriers to widen footways along lengths of road; reduce speed limits to 20 mph city wide; use planters or large barriers to prevent through traffic in residential streets and introduce measures to safeguard blue badge holders and people who use electric buggies.

In 2015, Exeter committed to becoming a carbon-neutral congestion-free city within 10 year, an aim that was ambitious when it was set and which, until lockdown was looking increasingly unachievable. But the current health crisis decimated traffic in one of the UK’s most congested cities. Somewhere along the route, the carbon-neutral target date was put back to 2030. In April, a group called Exeter City Futures published its ‘roadmap’ [we’re unsure if a pun is intended] to achieving carbon neutrality and on Wednesday is hosting a virtual ’emergency travel and transport’ meeting to address the issues. Like the Greens, the group, which is run by a hybrid public-private sector board but behind which the driving force is entrepreneurial, also wants to reduce reliance on cars and encourage active travel.