Choosing alternative means of transport is going to have ‘far-reaching consequences’:

The Telegraph makes it very clear that we are at a crossroads:

Within the next few weeks, millions of us are going to face a choice which could have far-reaching consequences for this country.  With lockdown set to be eased, but with social distancing likely to remain in place for the foreseeable future, we are going to have to decide how we get about.

Do we take public transport, knowing the risks involved in terms of spreading Covid-19? Rely on our cars? Do we use alternative means of transport and if so, which ones?

Or could coronavirus be the trigger to turn Britain into a cycling nation?

No one is saying we are going to be like the Dutch or the Danes overnight. At the moment, both statistically and culturally, we are light years behind our European neighbours. In the Netherlands a whopping 26 percent of all journeys are made by bike. In Denmark the figure is close to 20 percent. In Britain, pre-lockdown anyway, fewer than two percent of journeys were made by bike, accounting for just over one percent of total distance travelled….

At the crossroads: Why coronavirus could turn Britain into a cycling nation | telegraph.co.uk

There is reaction from predictable quarters:

Nevertheless, there are still problems with removing cars in town and city centres.

Firstly, an important source of revenue for councils is also removed – as pointed out last month from Exeter:

Exeter City Council is set to lose around £1m a month as a result of the coronavirus pandemic. Karime Hassan, Chief Executive and Growth Director of Exeter City Council, said that the impact of the lockdown imposed by the Government was beginning to bite on the finances of the council. Mr Hassan said that a significant impact was being felt by the reduced in car parking income, which last week was 98.8 per cent down on the budgeted target set in February.

Councils to be given extra cash

And this week, as measures are brought into effect in Exeter, there are still unresolved issues around finance and accessibility:

Exeter City Council may be conflicted. It supports the pledge to carbon neutrality, but also receives about half its income from residents and visitors from car parking charges. The loss of millions of pounds of income could affect its ability to deliver services, unless further government funding is received. That request has broad political support. Earlier this month, Exeter’s Greens warned that loss of car parking revenue was hitting the city. In a statement they said: “During the first two weeks of the lockdown, income from car parking all but dried up, falling from a budgeted £331,000 to an actual £11,000.” If the Greens, the city council and Exeter City Council are truly committed to having fewer vehicles on Exeter’s streets, that loss of income will continue, with the gap needing to be plugged in other ways if services are to be maintained.

A second problem with removing cars in town and city centres, is that businesses really do fear loss of footfall – as reported from Bristol today: 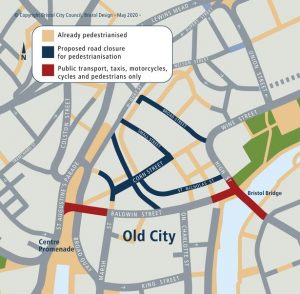 Hamid Parast, who runs Baldwin Street’s Centre Cafe Lounge, fears the move will make commuting more difficult, lead businesses to relocate their offices and turn the area into a “ghost town”. The 52-year-old accused Bristol City Council of failing to consult his business and others on Baldwin Street before the announcement, though the council says it had more than 1,900 survey responses on proposed pedestrianisation earlier this year.

Mr Parast said: “It will add to congestion and pollution because drivers will have to do a massive detour around the roads closed to traffic. It will be a traffic nightmare in areas like Temple Meads. Workers won’t be able to get into the city – not everyone can cycle and First Bus is not reliable. If they struggle to get in, offices are going to move to places like South Gloucestershire. The trade from office workers is half our business at the cafe. I think this will kill that trade. Offices in the city centre will be converted to student flats.”

A council spokesman said: “These measures are part of existing long-term transport plans, which have been accelerated in response to the Covid-19 pandemic conditions, offering an opportunity to change travel habits and behaviour by improving public transport reliability and building a more sustainable future as well as regeneration in the heart of the city. Pedestrianising the Old City area to restrict vehicles during core shopping hours will greatly enhance the area for people to enjoy and businesses there to use.”