STATE POWER IN A PANDEMIC: “To quarantine the people who are ill is not an interference with their rights; it is merely preventing them from doing physical damage to others.”

SUGAR TAX: “Decades of promoting exercise and healthier eating have had a negligible impact on obesity levels and that a more interventionist approach was needed.

Back in the 1970s and 80s, in the UK and US, there were serious arguments being made against the compulsory wearing of seat-belts:

And they continue to be made:

‘LAWS THAT SAVE LIVES’:

Interestingly, before the outbreak of Covid 19, comparisons were being made about ‘compulsion’ and ‘public health’:

And since the pandemic took hold, even more such comparisons have been made:

Why people object to laws that save lives – BBC Future

This could be framed as ‘the freedom to kill yourself’ – and yet, in classical philosophy, we cannot have unlimited freedom, as this would impose on the liberty of others.

The guru of libertarianism spoke on the issue of public health back in the 1980s:

“Remember that in all issues of protecting someone from physical damage, before a government can properly act, there has to be a scientific, objective demonstration of an actual physical danger. If it is demonstrated, then the government can act to protect those who are not yet ill from contacting the disease, in other words to quarantine the people who are ill is not an interference with their rights; it is merely preventing them from doing physical damage to others.”

“Just as the blissful freedom of the road requires measures to pave those roads, and well-drafted antifraud statutes only fortify the free market, sensible public-health policies—like mask-wearing rules, which protect both the individual and the commonweal—don’t compromise liberty; they advance it,” writes NYU School of Law and philosophy professor Kwame Anthony Appiah. “Bluntly put: There’s precious little freedom in the sick ward and less still in the graveyard.” 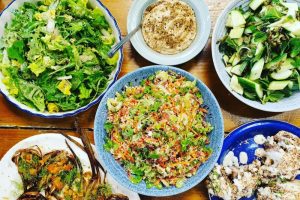 Which brings us to another current debate over the ‘nanny state’ needing to look after us for our own good: taxing salt and sugar in food:

Some measures were brought in back in June 2018:

The UK has introduced a sugar tax, but will it work? | LSHTM

Since, then, it’s been debated that more measures should be brought in, with comment in the Telegraph from last September looking at the issue in Latin America:

The coronavirus pandemic and its economic consequences have dramatically increased the number of people around the world who are food insecure, and it also has illuminated why improving the quality of our diets no matter where we live is a matter of life and death.

Those with diet-related conditions like obesity and diabetes are more vulnerable to Covid-19, more likely to die from it, and, based on new research, may be more resistant to a vaccine when it becomes available.

If we want to curb obesity and make it easier for everyone to choose and consume healthy foods, more governments should be following countries like Mexico and Chile.

How to create a sustainable food system: an analysis – Vision Group for Sidmouth

Over the weekend, he published the second part:

Sugar and salt should be taxed and vegetables prescribed by the NHS, an independent review of the food we eat has suggested…

Asked if this was an example of the nanny state where the posh tell the poor what is good for them, Mr Dimbleby said “it’s only posh people who ever say that to me… if you go to communities, they really want to change our food system”.

Psychologist David Halpern, who advises the government, told Today taxing sugar and salt could act as a “double nudge” on behaviour. He compared the concept to the sugar levy on soft drinks, introduced in April 2018 and which drove manufacturers to remove sugar from products through reformulation. He added that levy led to a reduction of sugar added into soft drinks of about a third, while sales also rose at the same time.

And our eating habits are not just damaging our health, they are also destroying the environment, the review warned. The food we eat accounts for about a quarter of greenhouse gas emissions, according to the review. The global food system is the single biggest contributor to biodiversity loss, deforestation, drought, freshwater pollution and the collapse of aquatic wildlife, said the review. It is also the second-biggest contributor to climate change, after the energy industry.

A lot of people are not keen:

Including the Prime Minister:

Boris Johnson has poured cold water on the National Food Strategy commissioned by his own government, saying he would not support higher taxes on salt and sugar in food. Speaking in Coventry, the prime minister said: “I’m not attracted to the idea of extra taxes on hard working people.”

The second part of the National Food Strategy was published on Thursday. Among its recommendations was a tax of £3 per kilogramme on sugar and £6 on salt destined for use in restaurants and food processing. These levies could increase the price of some confectionery and snack foods by up to 13 per cent.

Johnson added he would study the report. “It’s an independent report. Doubtless there are some good ideas in it.” But he stressed that while he believed in tackling obesity and helping people to lose weight, this was better done by promoting exercise and restricting junk food advertising.

Henry Dimbleby, the food entrepreneur appointed by Cabinet Office minister Michael Gove to compile the report, has argued that decades of promoting exercise and healthier eating have had a negligible impact on obesity levels and that a more interventionist approach was needed.

His stance has been backed by a group of investors with more than £2.8tn of assets under management… In a letter to the prime minister seen by the Financial Times they “call on the government to be ambitious in its response to the urgent challenges facing the food system”.

“We are only as safe as the most vulnerable among us”

photo: Sustain and its members respond to the National Food Strategy Call for evidence | Sustain