“If the government really means to “Build Back Better” it must recognise that conservation of buildings is now a climate issue and introduce reforms to ensure that bulldozing buildings is an absolute last resort.”

For some time now, the AJ has been campaigning for buildings to be retrofitted – rather than demolished and replaced with something else:

‘The greenest building is the one that already exists’

What iss particularly interesting for Sidmouth is that this campaign from the AJ was backed by SW Architects – who were to go on to design the replacement for the ‘bulldozed’ Knowle Hotel:

Back in September 2012, the VGS had concluded its submission to the planning application to demolish and replace the Knowle Hotel with this proposal:

ALTERNATIVE GREEN APPROACH:
Rather than demolishing the buildings at Knowle to finance the proposed relocation to Honiton, Robin Fuller in his open letter [to the Herald] suggests ‘A TRULY GREEN ALTERNATIVE TO EDDC’S PROPOSAL’:
1) Modernise the 1975 building at Knowle…
2) Sell the 1880/90s Knowle Hotel and caretaker’s lodge with outline planning permission to convert them into flats…

And in November 2017, with a new deal and SW Architects in the bag, the VGS was to ask a pertinent question: 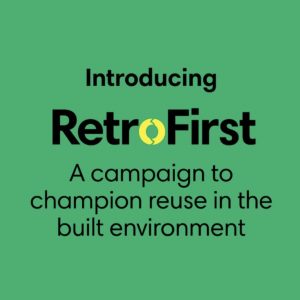 This week, the Architects’ Journal campaign has just been relaunched – and considerably ratcheted up:

Another key backer of the campaign is Corporate Energy Manager at Devon County Council:

Here is the announcement of the campaign from the AJ:

The film, available on YouTube and edited by film-maker Jim Stephenson, promotes the RetroFirst campaign for the re-use of existing buildings.

In it, the well-known Channel 4 presenter explains how replacing the 50,000 buildings lost to demolition in the UK every year with new structures made of concrete and steel increases CO2, with construction responsible for 10 per cent of UK emissions and almost two-thirds of all UK waste.

Despite this, the film points out, our planning system has yet to get to grips with this issue and our tax system perversely rewards the most wasteful type of construction while penalising the most sustainable. New-build housing is taxed at 0 per cent VAT, while most refurbishment work attracts the standard 20 per cent rate.

The AJ launched its RetroFirst campaign in 2019 after recognising the climate crisis, the wasteful nature of the construction industry and the potential of the circular economy to rapidly reduce emissions.

Will Hurst, AJ managing editor, said: ‘Demolition is the construction industry’s dirty secret. Despite all the declarations of climate emergency and talk of a green recovery, it is propped up by outdated rules and taxes and great swathes of our towns and cities are currently earmarked for destruction. If the government really means to “Build Back Better” it must recognise that conservation of buildings is now a climate issue and introduce reforms to ensure that bulldozing buildings is an absolute last resort.’

The RetroFirst campaign is backed by architects including 14 winners of the RIBA Stirling Prize as well as property firms such as British Land, Canary Wharf Group and Grosvenor Britain & Ireland, engineers including Arup, and professional organisations such as the RIBA, the RICS, the RTPI, the TCPA and the UK Green Building Council (see full list of supporters below).

In January, the campaign was the subject of a letter to The Times  signed by Clarke and 34 others, including former Environment Secretary and peer John Gummer, campaigner Doreen Lawrence, British Land chief executive Simon Carter and architects Norman Foster, Asif Khan, David Chipperfield and Sarah Wigglesworth.

The following month, a report from the Commons Environmental Audit Committee echoed RetroFirst’s recommendations on policy and VAT, calling for new regulations to cover embodied carbon in construction and asking the Treasury to ‘correct the disparity’ between the zero rate of VAT on new-build construction and the full rate charged on retrofitting.

The three demands of RetroFirst