“The only prospective zero in Exeter’s decarbonisation plans … is the probability that it will achieve them by 2030.”

‘Zero carbon’ might be a slippery fish when it comes to a definition:

What is exactly is ​‘net-zero carbon’? … revisited – Vision Group for Sidmouth

When it comes to ‘zero carbon’ in the county town, it becomes very fishy indeed:

The Exeter Observer has more news on this rather sorry if not sordid tale, with this piece from just before the recent local elections: 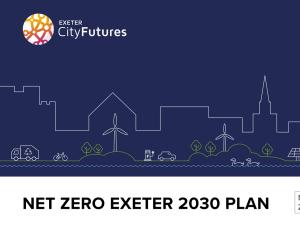 Exeter City Council’s ruling Labour group manifesto for tomorrow’s local elections places the council’s current policy of “creating a net zero carbon city by 2030” at the centre of the party’s claims about its capacity to transform the city in the coming years. Council leader Phil Bialyk has pledged that that this aim would be “at the heart of everything the council does going forward”.

Exeter Labour’s election campaign has also been dominated by claims about its environmental credentials, prompting a war of words with Exeter Green Party, which has presented Labour with a series of challenges on green spaces, air pollution, transport, housing and waste management.

However, from the moment Devon County Council adopted its updated 2020-2030 Exeter Transport Strategy in November last year, the only prospective zero in Exeter’s decarbonisation plans became the probability that it would achieve them by 2030…

With more in its newsletter out today:

IS EXETER CITY COUNCIL GOING TO ABANDON ITS NET ZERO 2030 TARGET? A report in March by the city’s Chief Executive said there was a high risk that the council will be unable to “deliver carbon neutral aspirations for Exeter by 2030”, citing Devon County Council’s draft plan statement that “net zero cannot be achieved by 2030”.

The review which accompanied the report suggested alignment with the Devon Carbon Plan, which is currently aimed at “a 50% reduction in carbon emissions by 2030 and net zero by 2050”, although any change in policy would require a decision by councillors.

A report on the city council’s “Net Zero Proposals” was scheduled for the Executive’s April meeting but then disappeared from the Executive forward plan before the local elections. It is now back in front of the Executive on 6 July, but will be discussed in private, with members of the public and press excluded. Read more on our website or join the conversation on Twitter.

PS: The council leader’s post-election statement made only a single, passing mention of the net zero 2030 plan despite its front and centre prominence in the Exeter Labour election manifesto.

Meanwhile, though, most would like to see it happen:

Here’s the original Exeter document from a year ago:

How Exeter will become net-zero carbon by 2030 – Devon Live