Building on green-belt, building in farmland:

“Saying that the FT article on planning is an ‘intelligent’ take on things goes against all the other things the VGS bangs on about!”

“Suggesting gardens are necessarily good for wildlife needs some research.”

Following this posting from the weekend:

And in particular the sections taken from an FT article:

Why radical reform of urban planning is essential | Financial Times

“Looking at your piece on planning and housing, you say that

‘The FT’s Chief Economics Commentator, Martin Wolf, gives his different and intelligent take on the issues…’

I would not say it was ‘intelligent’, I would say it was lazy thinking.

Green belts are not to ‘enforce class’, they are there to stop towns and villages running into each other and therefore depriving both animals and people of corridors of nature.

Is it really house owners who want to maintain greenbelt? I thought it was more walkers, people who want to maintain their communities and not be subsumed, people protecting their economy, and people worried about services being overwhelmed if villages and towns join up.

Is Martin Wolf writing about the people round London and their attitudes? Are the people in Sidmouth/Sidford/Sidbury trying to protect green belt for the reasons he gives?

I also think that getting rid of farming land, whether it is currently monoculture or not, is an unsustainable approach; it is against the idea of food security and local food. If we are dependent on other countries for food it is not a good situation.

Then you have to think about how much land we have which is not suitable for building or arable farming, the UK has a heck of a lot of hills with thin soil. We could build there but it would require new roads and services and it is intrinsically more difficult to build on slopes. And what about flood plains? Or wooded areas?

And arable fields may not have the diversity they should have but farming methods are changing to bring it back, as you have pointed out on many other occasions. We also still have the hedges which provide nesting and travel corridors, these are not recreated in most gardens. 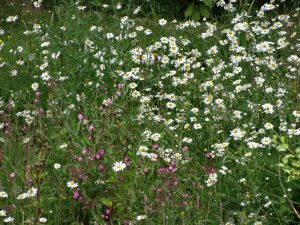 When considering gardens we should always remember that the gardens of people who don’t like gardening tend to get paved over which is good for no-one and increases the risk of flooding. Or they leave it to get completely overgrown and it becomes the best environment for rats ( and rusting cars/old fridges/broken glass/etc)

Further, I don’t think that the new homes which would be built would have big gardens because many people do not like big gardens they have to work on, and I don’t think the homes would necessarily be large. Even with unlimited land it would still be most profitable to pack housing in together; economies of scale and all that.

Suggesting gardens are necessarily good for wildlife needs some research.

We have about 3/4 acre of garden. The house was built in 1964 and the gardens of the first owners were originally very modern/fashionable for the time with terracing, dwarf conifers and some exotic shrubs and trees. The people who followed them were not gardeners and backfilled all the terracing and turfed it, they also let the trees and remaining conifers grow unhampered so there was little diversity in that there.

The people who followed them liked the shady feel, lawns and foliage plants for flower arranging ( things like hostas) with few flowers. So when we came after them we inherited a garden most of which was either lawn, where there was sun, or in deep shade under laurels, huge ash trees, a huge sycamore, most variety for wildlife was non-existent. There were occasional flowers in spring ( and the hostas!) and about half a dozen once-flowering roses and that was your lot. 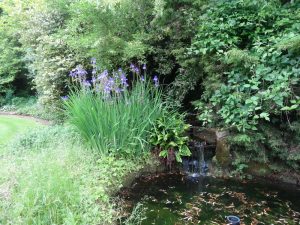 The only wildlife around were slugs and snails and frogs, with a few birds. We now don’t have the frogs ( to our sadness) as the pond is colonised by newts who eat them all before they get to adulthood. At one stage we tried to rear the tadpoles in a wheelbarrow but the newts got in there too, we even tried the waterbutt as a nursery with pond weed and bits of catfood on threads once they stopped eating weed; but as soon as they could leave the water they left the butt and dried out because they couldn’t get back. So, no frogs.

It has taken us 25 years to almost successfully establish good biodiversity. Even the huge holly hedge had been let grow too open and didn’t give good nest sites. We are still battling to get it close knit on the sides although the top is dense enough to walk on!
So of the 4 owners of this house since it was built 3 of us have been gardeners but only one of us gardens with wildlife in mind.

Saying that the FT article is an ‘intelligent’ take on things goes against all the other things the VGS bangs on about!”

photos: from the correspondent’s own garden