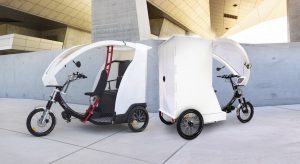 Sidmouth had been hoping for a combined passenger/delivery service via e-trikes or bikes:

Should Sidmouth have its own e-trike service? Press reports – Vision Group for Sidmouth

However, current legislation will not allow local authorities outside London to issue anything that isn’t a four-wheel vehicle – which has scuppered plans for an e-trike service, at least for the moment:

Something which does not impress those trying to push for such a service to be accepted more widely:

Meanwhile, Exmouth had been hoping for its own e-bike delivery service:

An e-delivery service launches in Exmouth – Vision Group for Sidmouth

However, despite a very successful trial run – it hasn’t been able to progress beyond that:

However, it’s still very much considered as a viable business, with everything set up:

Nevertheless, the move to e-vehicles continues in earnest.

And in Tokyo, it’s all electric:

Electric cargo bikes deliver about 60% faster than vans in city centres, according to a study. It found that bikes had a higher average speed and dropped off 10 parcels an hour, compared with six for vans.

The bikes also cut carbon emissions by 90% compared with diesel vans, and by a third compared with electric vans, the report said. Air pollution, which is still at illegal levels in many urban areas, was also significantly reduced.

Home deliveries have soared in recent years, spurred by online shopping and the coronavirus pandemic. Vans can travel along clear stretches of road at higher speeds than cargo bikes but are slowed by congestion and the search for parking. Cargo bikes bypass traffic jams, take shortcuts through streets closed to through traffic and ride to the customers door.

Carbon emissions from transport have barely fallen in the past decade and pose a significant challenge for the UK in meeting its targets to combat the climate crisis. The government recently announced a 30% rise in funding to make cycling and walking easier. The report’s authors said the government should consider cutting the VAT rate on cargo bike deliveries and allow more powerful e-bikes to be used.

photo:  Should Sidmouth have its own e-trike service? – Vision Group for Sidmouth