Warning: dns_get_record(): An unexpected server failure occurred. in /homepages/28/d740365789/htdocs/clickandbuilds/VisionGroupforSidmouth/wp-content/plugins/zero-spam/modules/class-projecthoneypot.php on line 105
 Sidmouth cycle paths: when and how much? - Vision Group for Sidmouth
Skip to content
Contents

Back in July 2012, Devon announced its plans for cycling in the county:

The Devon Cycling Strategy will plan for continued investment over the next five years. Consultation on the document is due to start later this month to enable the public and relevant bodies to contribute to the aims of the strategy before it is published later this year.

The council is already investing £13.9million on cycle infrastructure to 2015, supplemented with additional funding through the Local Sustainable Transport Fund, developer contributions and other grants. The draft programme of schemes includes links from Sidford to Sidbury, Knowle to Willingcott in Barnstaple and Newton Abbot to Torbay and Bovey Tracey.

The County put its strategy together in 2015 and has until 2021 to achieve its ambitious targets: 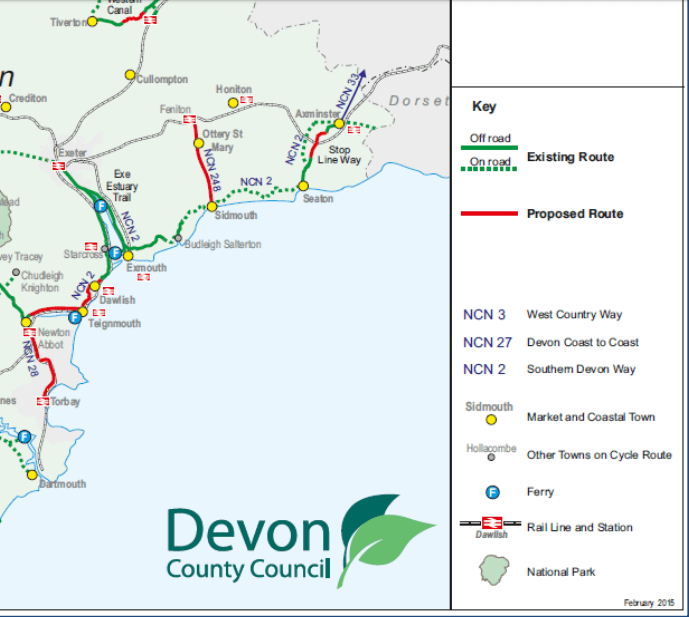 The County Council’s Cycling and Multi-Use Trail Network Strategy outlined targets to increase the percentage of journeys to work by bike to 12% by the next census in 2021.

In line with the priorities outlined in the Council’s Cycling and Multi-Use Trail Network Strategy, a network of proposed cycle routes was put forward in 2015.

With an update from November last year:

However, things have been moving frustratingly slowly:

As reported in the Herald, the cycle plans for Sidmouth will take many more years:

‘Money and enthusiasm’ is needed to get a Sidmouth-to-Feniton bike path project off the ground.

Those were the words of town Councillor Denise Bickley at the latest Sidmouth Town Council meeting on Monday, September 2.

Cllr Stuart Hughes, who represents highways at Devon County Council (DCC), assured the chamber that both the Sidmouth-to-Feniton multi-use trail and the Sidford-to-Sidbury cycleway were included in DCC’s cycling strategy.

He said: “This is a very protracted, long, drawn-out procedure. If you take the Exe Trail, that took 15 years to complete.”

A ballpark figure to complete the Sidmouth-Feniton trail route would be in the region of £10million with a further £5million needed to build a bridge and redesign a junction.