What is the ‘Greater Exeter Strategic Plan’? 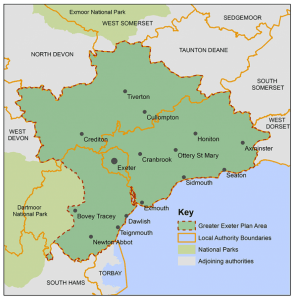 The GESP proposals include draft planning policies and large scale development options across all four council areas for the next twenty years, up to 2040. It will tackle big planning issues affecting the Greater Exeter area, including climate change, meeting the need for new homes, jobs and infrastructure, transport and wildlife protection. The GESP will also identify possible development sites across the area, including large regeneration sites in Exeter.

A list of sites where major development could take across the Greater Exeter area have been unveiled.

The Greater Exeter Strategic Plan, which will provide the overall spatial strategy and level of housing and employment land required across Exeter, East Devon, Mid Devon and Teignbridge in the period to 2040, has seen the draft policies and site options document for it produced.

A minimum target of 2,663 homes per year, or 53,260 homes over the 20 year period of the plan, is required to be built, with the overall need for development sites equates to 63,912 homes with a 20 per cent buffer required.

Greater Exeter: Every site that could be built on in major development – Devon Live

This week, Teignbridge District Council’s overview and scrutiny committee has just discussed a draft document for the Greater Exeter Strategic Plan – and some councillors were angry at the “all-out attack” on the area:

… Cllr Liam Mullone, leader of the Newton Says No group, said that the GESP was an unmitigated catastrophe for everyone involved and for the environment and hoped that East Devon’s new administration when they debate the document do pull out of it.

Cllr Richard Daws added: “The GESP is a plan that was dreamt up in a pre-covid world. It was ill thought out and does not represent the very best interests of the residents. The purpose of it is to shoulder the weight of Exeter’s ambitious growth targets – more ambitious than China’s – and for those housing to be foisted onto Exeter, East Devon and Mid Devon.

Next week, the East Devon District Council’s own Strategic Planning Committee will be meeting up to consider the ‘draft policies and site options’ document; a public consultation is to begin in September:

With the agenda here:

To seek Members support for the on-going engagement of East Devon District Council in the production of the Greater Exeter Strategic Plan.

To explain how the proposed Joint Statement of Community Involvement has been amended in light of the responses to the 2017 consultation and to take into account of Covid-19 restrictions on social interation. 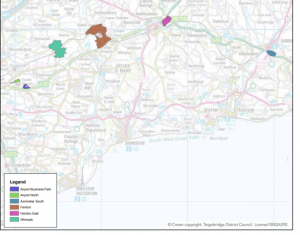 These are the sites to be considered in East Devon:

COWLEY: Up to 500 homes could be built in the parish.

HIGHER GREENDALE: The 107 hectares of land is adjacent to the A3052. It adjoins Crealy Adventure Park to the west and Greendale Business Park to the south. A total of 1,300 homes plus employment use could be accommodated.

HILL BARTON: A large area of 660 hectares largely comprised of rolling farmland extending from the A30 to the A3052, before adjoining the Hill Barton industrial area to the south. It covers the parishes of Clyst Honiton, Sowton, Farringdon, Aylesbeare and could see 10,000 homes built, as well as employment land.

OIL MILL LANE: A large area in East Devon largely comprising rolling farmland extending from the A3052 to Woodbury Road, and adjoins Crealy Adventure Park to the north-east. It stretches through 380 hectares across Sowton, Clyst St Mary, Clyst St George, Woodbury and could accommodate 4,000 homes and employment.

POLTIMORE EAST: A series of agricultural fields on a shallow ridge which slopes gently down eastwards towards the River Clyst. The land could be used as a Motorway Services Area only. The site is largely within the East Devon Local Plan designated Clyst Valley Regional Park.

SOWTON: An area of land adjoining the A30 and close to Junction 29 of the M5. The 30 hectare site could be used as employment land as an extension to the Science Park. The site is within the East Devon Local Plan designated Clyst Valley Regional Park.

WESTCLYST AND MOSSHAYNE: The site consists of 117 hectares of predominantly agricultural land and marshland surrounded by the M5 motorway, railway and the River Clyst. Sites immediately to the west of the site and the M5 and south of the site and the railway have been allocated by the East Devon Local Plan and Exeter Core Strategy and are now under construction and 1,600 homes could be built.

AIRPORT BUSINESS PARK: 27 hectares of primarily agricultural land sandwiched between the airport and the A30 which could be used for employment land.

AIRPORT NORTH: 22 hectares of land within active airfield uses and hosting supporting infrastructure on the north side of the runway at Exeter Airport, south of Skypark and Cranbrook’s proposed southern expansion area.

FENITON: The sites consists of 352 hectares of predominantly agricultural land surrounding the village of Feniton, on both sides of the railway, and could accommodate 2,800 homes.

HONITON EAST: 72 hectares of agricultural land to the east of Honiton situated primarily on land rising towards and surrounded by the Blackdown Hills and East Devon Areas of Outstanding Natural Beauty. Site is sandwiched between the A35, ExeterWaterloo railway line and the A30 and could see 1,100 homes built.

WHIMPLE: 337 hectares of predominantly agricultural land to the north and east of the village of Whimple, located on both sides of the railway and could accommodate 2,500 homes.

Greater Exeter: Every site that could be built on in major development – Devon Live

This includes a network of linked villages, referred to as Clyst Villages, in the North West Quadrant area of East Devon:

There has been a lot of politicking over the Plan…

The CPRE published a report in September 2018, concluding that 35% more houses are planned over the next 10 years than are required for anticipated population growth and inward migration:

There were delays reported in October 2019 – about delays back in November 2018:

The original timetable for the Greater Exeter Strategic sought to adopt the plan by June 2020, but the plan was delayed after East Devon’s Strategic Planning Committee in 2018 unanimously rejected the original document: 271118strategicplanningcombinedagenda.pdf

… following May’s elections, which saw a change of administration running Teignbridge, East Devon and Mid Devon council’s, plus Exeter City Council have a new leader, the preparation of the plan was put on hold so that the new council leaders could meet and discuss a preferred way forward for the plan, including an updated description of the plan and a new timetable.

Then we had elections in East Devon in May 2019, as reported in these pages – with reference to the GESP:

All change at the District Council? – Vision Group for Sidmouth

The GESP continued to rumble on over the following twelve months:

What is the Greater Exeter Strategic Plan? And how will the new District Council work with it? – Vision Group for Sidmouth

Plans for housing in East Devon – Vision Group for Sidmouth

And in May this year, a regime change was on the cards:

Why is the District Council not meeting? – Vision Group for Sidmouth

However, even though the Strategic Planning Committee at East Devon is newly-constituted with an entirely different membership, it will be taking on a GESP which has been years in the making – and which is fraught with multiple issues.

Here is an analysis from a former independent councillor for East Devon who was heavily involved in strategic planning between 2011 and 2015:

Proposals for thousands of houses in East Devon, as part of new plan to 2040 – Claire Wright

Here is a very political reminder of the context to strategic planning back in 2013:

Futures Forum: “The depressing truth is that corruption is endemic in Britain’s bureaucratic planning system” >>>  “The taint left by Graham Brown from March 2013 lingers in high circles, continuing to discredit East Devon District Council 5 years on.”