Latest questions on the Preferred Option

Over the years, schemes to ‘save’ the cliffs at the mouth of the River Sid have been considered – as they continue to fall away at an increasingly alarming rate:

Last year, the SVA put on a comprehensive show of how the cliffs have evolved:

The Lost Cliffs of Sidmouth > Exhibition – Vision Group for Sidmouth

A correspondent notes a further resource:

“The marvellous Sidmouth Remembers Facebook page has numerous photos of our seafront down the years.

“This one clearly shows how much cliff we have lost in recent years. It demonstrates that slow erosion allows a form of ‘angle of repose’ to develop and vegetation to form. This is very much the character of the cliffs at Pennington Point that I remember.”

“Two stills from a 1939 travelogue on the BFI site. Just look at the size and quantity of the red cliff between Alma Bridge and the sea!”

Where we are now

To look at the steps taken and issues involved…

The last BMP Steering Group meeting was held on 6th February 2020 – although there are no minutes available, even to SG members, and no press release has been issued by the District Council.

Before then, a finance subgroup meeting was held on 9th October 2019.

Further Steering Group meetings had been planned, but have not happened due to the Covid pandemic; it is understood that holding a virtual meeting has been considered.

The Minutes refer to several outcomes, including:

“Implementing the preferred scheme before the loss of Pennington Point through erosion which would lead to reverting [the] scheme to protect the town frontage.”

However, there is now concern that we will indeed see ‘the loss of Pennington Point’:

“The Group were reminded of the risk considerations, particularly the impact on the project if Pennington Point is lost.”

In other words, if ‘Pennington Point is lost’, the project have to be reconsidered – which would mean that the Preferred Option would have to be abandoned in favour of a ‘town only option’.

In which case, over one year on, the District Council’s position as expressed at the August 2019 meeting is already out-of-date:

The option of another offshore island was considered, ‘preferred’ and then dismissed:

Futures Forum: Beach Management Plan: Option 4b or not 4b >>> or: how to ignore everyone else’s opinion

It was argued that this option would also have the effect of preventing any green water ingress for the forseeable future – thus questionning the need for raising the sea wall any further:

A further offshore island, it was felt, would both improve the Main Beach and provide some limited protection for Pennington Point – by replicating the effect achieved by the two existing islands which has given a larger, level,more stable beach and shallower water.

The major problem cited against an offshore island has been cost:

However, this Option 4b has never been properly costed:

The former bridge, the Nineteenth Century construction designed by Sampson, is being replaced by a new bridge further up the River Sid:

The old bridge had become increasingly under threat from the sea, with Pennington Point no longer affording any protection:

Futures Forum: Pennington Point: “Let’s get on with it: I want to see the Alma Bridge happen.”

Futures Forum: Sidmouth Beach Management Plan… Pennington Point… Alma Bridge… “Due to the environmental status of this site preventing any protection works, it is not possible for DCC to undertake the bridge replacement at its current position”

However, there is concern that the removal of the remains of the redundant Alma bridge will also mean the removal of a further impediment to the sea, as it would reduce the energy coming in and the height of waves travelling up the River Sid positioned next to the fluvial defences there: 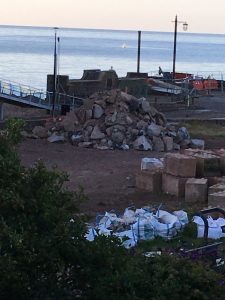 This photograph was taken by a resident of Glenisla Terrace on the Ham, on 18th July 2020, showing boulders taken up and away from the Sid River bed:

“which EDDC have turned down to have placed at Pennington Point. The Contractors, at cost, will transport these away to landfill.”

According to another observer:

“These appear to be natural boulders that have taken millions of years to reach our foreshore, and are now, it seems, being removed.

“Furthermore, my recollection is that EDDC/DCC were given planning permission to deposit material from the river on the beach at Pennington Point.”

It is clear, however, that an offshore island will only offer limited protection to East Beach and Pennington Point.

In which case, it has been argued that rock revetment at Pennington Point should be reconsidered:

The current Preferred Option of the supergroyne and a constantly recharged beach has many questions around it:

It has been suggested that a simple, low-level permeable rock revetment would be a clear way forward.

The basic idea behind rock armour/revetment is that it dissipates the wave action, which is the main cause of cliff erosion, by hammering the base of the cliffs twice a day at high tide. With shingle building up behind, on top and in front of the rock armour, it is doubtful that the cliffs would receive such an impact.

To quote the County Councillor from five years ago:

“We can reflect on what has happened in the past because if rock armour similar to that which was placed at Clifton (between Main and West Beach)… had been replicated east of the Sid and which Consulting Geologist Dr Geoffrey Kellaway fought for… Then we wouldn’t be in the position we are in today.”

And from last year:

“The recent exposure of the remaining section of tunnel on east beach that was built to bring stone to Sidmouth for a harbour development and then had to be abandoned as it hadn’t been made big enough to allow the steam engine to pass through makes me shudder especially when visitors and even some locals ignore signs not to go near the cliffs due to frequent rock falls.

“This latest exposure spells the beginning of the end for the last section of tunnel and once breached will see a catastrophic cliff fall/ land slip which we haven’t seen the likes of before.

“I’ve been studying this area ever since consulting geologist and member of the Geographical Survey Dr Geoffrey Kellaway contacted me and came to Sidmouth back in the early 90’s and warned of the consequences of building hard rock off shore breakwaters in a soft rock area.

“He was absolutely correct as we have seen enhanced erosion, he also quite rightly claimed that rock revetment at the toe of the cliff would be environmentally acceptable and would dissipate wave action.

“This would still allow cliff falls until the angle of repose at the top was reached however Natual England (formerly English Nature) and Jurassic Coast WHS objected and we are where we are today and still awaiting an affordable Beach Management Plan scheme, so please do take notice of the safety warnings.”

Finally, further along the Jurassic Coast, a rock-amouring has been given the enthusiastic go-ahead by the authorities:

This document was put together by District Council officers and engineers largely in response to the call by the County Councillor for emergency rock revetment in February/March:

The report was presented on 7th July 2020 – and considers the risks and benefits of doing short term works before the BMP is completed.

The Recommendations were as follows:

Unless a new source of funding becomes available, it is recommended not to proceed with any short term works at this time. This is due to the following reasons:

1: No identified existing funding source and poor value for the taxpayer should funding be identified.

2: Latest erosion rates suggest the erosion rate at Pennington Point is slowing down. With the BMP now fully funded, this should be constructed prior to higher flood risk being realised.

3: December 2020 would be the earliest contractors could be on site due to the required planning permission. Construction would be very risky during December.

4: No real cost saving for rushing to utilise DCC’s contractors, as specialist long arm grab excavators would need to be hired in. (and works could not commence until December 2020, when they would be off site)

5: The project will likely delay the implantation of the BMP further, as both internal and external resource will need to be diverted to deliver this.

However we will continually review the situation, and should a period of increased erosion occur, and it qualifies for emergency works, we will investigate adding additional rock armour, and using emergency powers to carry out the works.

In conclusion, it is clear that any placing of rock armour in a designated place such as the World Heritage Site would need further consultation, which would take considerable time and resources.

A further issue is that the Preferred Option was selected prior to the new sea level estimates:

The splash wall was simply added on to the project at a later date – rather than the whole project being reconsidered, to take into account the new information and how these demands could best be met.

It is clear that the District Council have preferred the splash wall addition, rather than a rock revetment on East Beach accompanied by some form of offshore intervention. The council will not reconsider the Preferred Option – despite there having been several amendments and iterations since it was adopted:

If the Preferred Option were to be re-examined in the light of the new data on sea level rises, then rather than erecting a highly unpopular sea wall, perhaps the alternative option of a permanent rock revetment, together with a possible offshore island, should now be seriously looked at.

After all, in its report of 7th July, officers stated that they were willing to ‘review the situation’…